Backtest & automate trading strategies you have seen on YouTube

Set up your subscription at Whitebox (on this site)

The next step is to set up your Whitebox subscription. Once subscribed, link your TradingView username to your profile, and you will instantly get access to all of our TradingView strategies and indicators. To subscribe, please click here.

Apply a strategy to your chart

Open a chart on TradingView, and bring up the indicator search window. Click on the 'Invite-only' section, and choose a Whitebox strategy you wish to use.

Once you have a strategy applied to your chart, open the 'Strategy Tester' tab at the bottom. Here you will see various metrics showing how the strategy would have performed in the past. Try changing the values in the strategy settings window, and see how the results change.

You also have the option to auto-trade with the strategies, by connecting them to any third-party trading automation platform, such as 3Commas, Alertatron, Cryptohopper, Capitalise.ai or MetaTrader (and others). Simply create an alert on TradingView, and use the webhook functionality to connect the strategy to the platform you wish to trade on.

The very reason we built our TradingView strategies is to help you find an answer to this question yourself!

Each Whitebox strategy is backtestable. Backtesting is the act of executing a trading strategy on historical price data. It will tell you whether a particular trading strategy was profitable in the past.

Can I trust the backtest results?

With recent improvements to TradingView's backtesting engine, the platform is getting closer and closer to a state where automated backtesting results can be just as much relied on as if the backtest was done manually.

(Please note that the features discussed below require a Premium TradingView subscription.)

Bar Magnifier helps combat ambiguity around trade outcomes. Without the Bar Magnifier enabled, the backtesting engine makes assumptions about how candles have developed, which may result in the wrong outcome determined for a particular trade. With the Bar Magnifier enabled, assumptions are replaced with intra-bar inspection. Instead of trying to guess how a historic candle developed, TradingView will automatically look at the lower timeframe candles to understand how the higher timeframe candle formed.

You have probably heard the saying: "Past performance is no guarantee of future results".

For more information on this subject, please read Investopedia's article on backtesting: Backtesting and Forward Testing: The Importance of Correlation.

If you base your trading decisions on what the strategy is doing, please remember that you do it at your own risk.

If backtesting shows that a strategy was profitable in one market, does it mean that it will be just as profitable when applied to another market?

Most likely not. Many assume that if a trading strategy produces good results on a 1-hour Bitcoin / USD chart, the same strategy applied on a 30-minute Ethereum / USD chart will show similar results. However, this is rarely the case. Every market and chart timeframe will produce different backtesting results. One strategy showing positive backtesting results in one market may produce disastrous results in another market.

Can I use the strategies to auto-trade for me?

Yes, although not directly on TradingView. Unfortunately, TradingView does not allow strategies to execute trades on real exchanges.

Automation can be achieved by combining the strategies with 3rd party trade execution platforms, such as 3Commas, Alertatron, Cryptohopper, Capitalise.ai, ProfitView, PineConnector, etc.

First, you need to set up the strategy on TradingView the way you like, then create an alert based on your settings. Using the webhook* functionality of the alert, you can link your alert messages to the 3rd party platform. Whenever the strategy opens or closes a position on TradingView, it will send a signal to your chosen platform. When your platform receives a message, it can open and close positions on your behalf on the exchange.

Why would I want to use your software?

The reason we created our strategies is to help you save time.

Backtesting a trading strategy manually is very time-consuming and prone to errors. Every time you change anything in your setups, such as the chart's timeframe, or a single value in the indicator settings, you have to start the backtesting all over again.

The ability to run automated backtests in a matter of seconds across various markets and timeframes can be a great time saver.

Please note that there is nothing these scripts give you that you wouldn't be able to do yourself manually. The use of the scripts won't give you an "edge". They exist so that you can spend your time on things other than looking at charts all day long.

Are the strategies "fine-tuned" for any particular market?

No. Each market and time frame requires different settings to produce a profitable backtesting result. Hence it would not make sense to fine-tune any of the strategies, as everyone will be using them on various markets/timeframes.

Do you provide configuration templates for each strategy?

At the moment, we do not.

Are there any risks involved?

While every attempt has been made to make the strategies as accurate as possible, you should be aware that the use of the strategies does not constitute financial advice. You should never risk more money trading than you can afford to lose. Most retail traders lose money in the long term. The strategies are not part of a get-rich-quick scheme; they are simply tools in your trading toolbox. The strategies should be used for educational purposes only; to help you understand how your decisions (like how much money you risk per trade) can affect your long-term trading success. We created these strategies to free you from having to backtest manually. We do not claim that using the strategies will make you any money. They are to be used to see if a particular trading strategy would have worked in the past. Please keep in mind that just because you have found a specific configuration that appears profitable in the past, there is no guarantee that those settings will perform the same in the future. If you base your trading decisions on what the strategy is doing, please remember that you do it at your own risk. It is your responsibility to keep an eye on your trades. Sometimes the entry/exit alerts are not delivered on time / at all due to various reasons.

How do the scripts work?

The scripts use a combination of technical analysis indicators to decide whether it is a good time to enter a trade.

Once a position is open, it will be closed as soon as the take profit or the stop loss is hit (or if an early position exit condition becomes true).

Each script has its own set of indicators. Some use an EMA & ATR; others use Divergences & Stochastic RSI crosses.

The technical analysis indicators used in the strategies are all well documented on the internet.

We do not keep any of the indicators used secret. Every indicator is called by its well-known name. For further information please see the next question.

We build indicators that use well-known technical analysis algorithms for producing buy and sell signals. When you use our indicators, you will understand why you are being told to participate in a market.

Most companies that sell trading indicators online tend to provide traders with tools that function as a black box. A black box is a system that produces information without revealing anything about its inner working. Once you add such an indicator to your chart, all you have to do is to sit back and wait for the buy/sell signals to pop up. Once they show up, you have no idea why a particular signal appeared. This is because you don't know what algorithm the indicator uses to produce those signals; the company considers the algorithm proprietary. Because of this, people tend to think that the makers of such indicators possess knowledge that others don't. This is rarely the case, however. Instead, what usually happens is that they repackage well-known, decades-old technical analysis indicators (e.g. they rename Bollinger Bands' upper and lower bands to "Northern Cloud" and "Southern Cloud") and sell them as their own creation. Unsuspecting beginner traders buy into this apparent magic, and they assume they have found the Holy Grail of trading.

On the other hand, there are systems that are fully open & transparent, with their inner working entirely exposed to the user.

These are called white-box systems.

We at Whitebox Software believe in transparency. We believe that magic has no place on the charts. Technical analysis has no magic to it, after all. On a standard candlestick chart, there are five pieces of information available to everyone: the open, high, low, and close prices of each candle and the volume that was traded during those candles. Every technical analysis indicator sold on TradingView uses some or all of these values to suggest whether it considers a particular asset being bullish or bearish.

The indicators and strategies we built all use a combination of well-known, documented, decades-old algorithms to produce their signals. We call each indicator by its name, so you don't have to wonder why the script decided to open a position.

I just set up my subscription, but didn't receive an email. What should I do?

If you mistyped your email address during the signup procedure, please get in touch with us via the Live Chat feature found at the bottom right corner of this page, and we will get you back on track.

Do I get access to the source code of the strategies and indicators?

No, the scripts are not open-source. 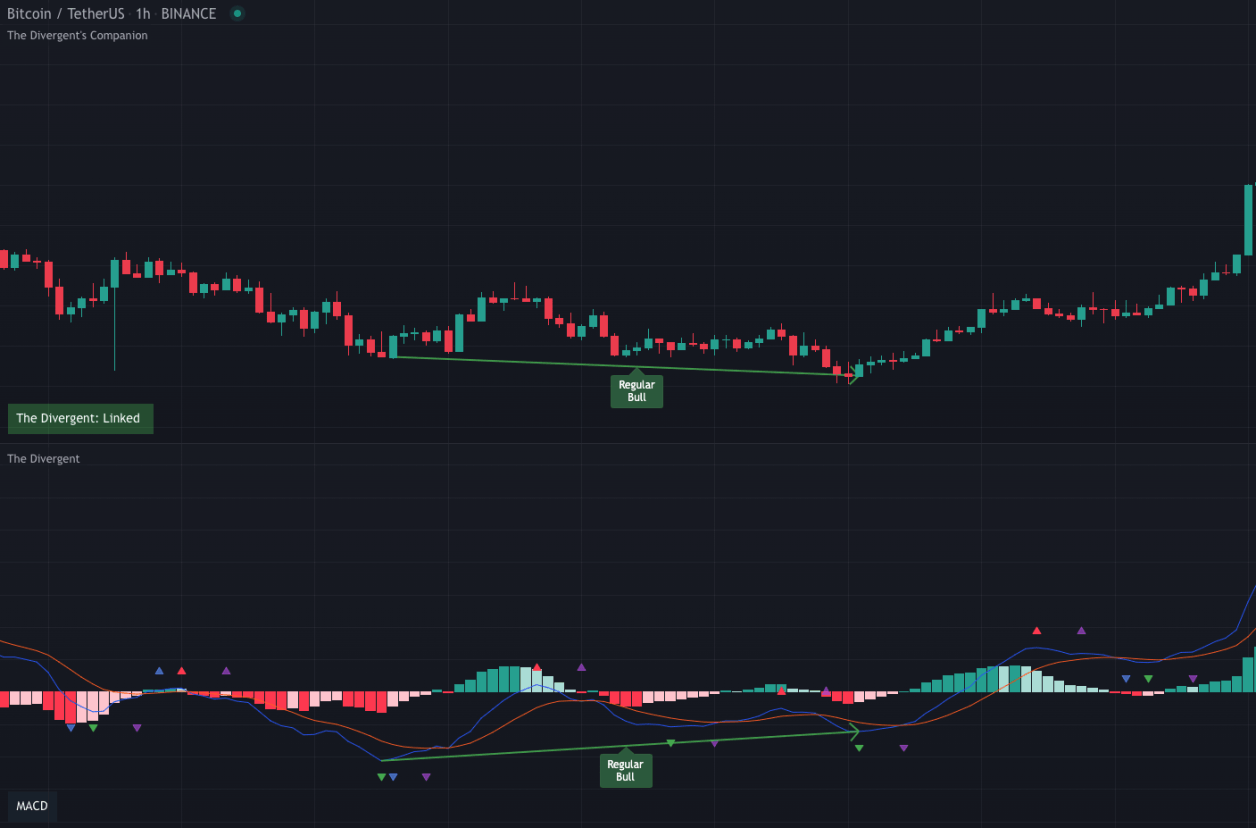 Automated divergence detection with unparalleled customizability for any market on TradingView. 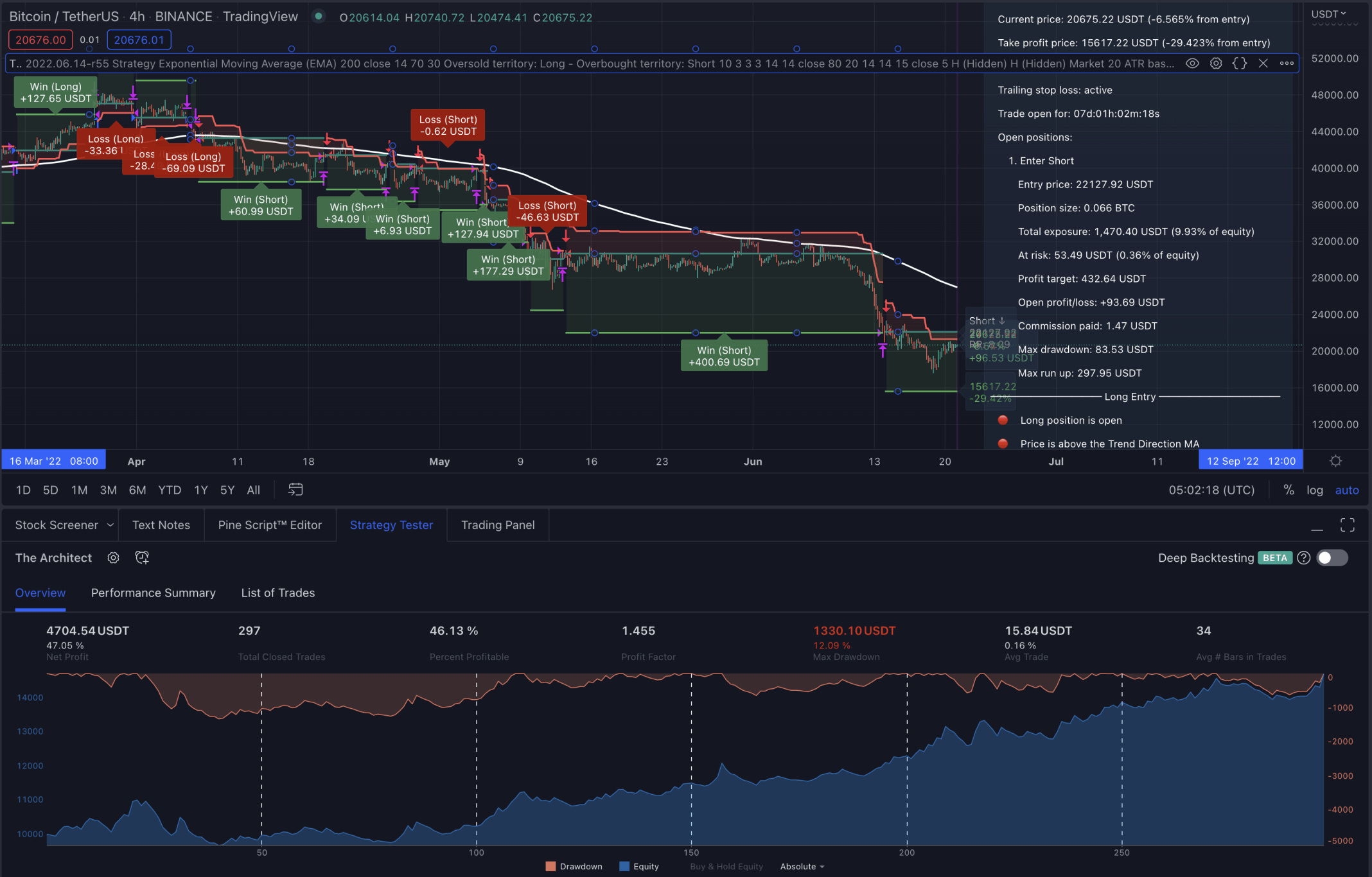 We openly declare every technical indicator we use in our strategies.

Our strategies can be backtested on TradingView on years* worth of price data.

Every indicator and strategy can be fully customised through dozens of configuration options.

With every strategy's built-in risk management settings, you will quickly understand how your risk setup can affect your long-term profitability.

Ready to be automated

All strategies can be automated on various platforms, such as 3Commas, Cryptohopper, Alertatron, PineConnector, Capitalise.ai.

We continuously listen to user feedback and provide frequent updates to our tools. 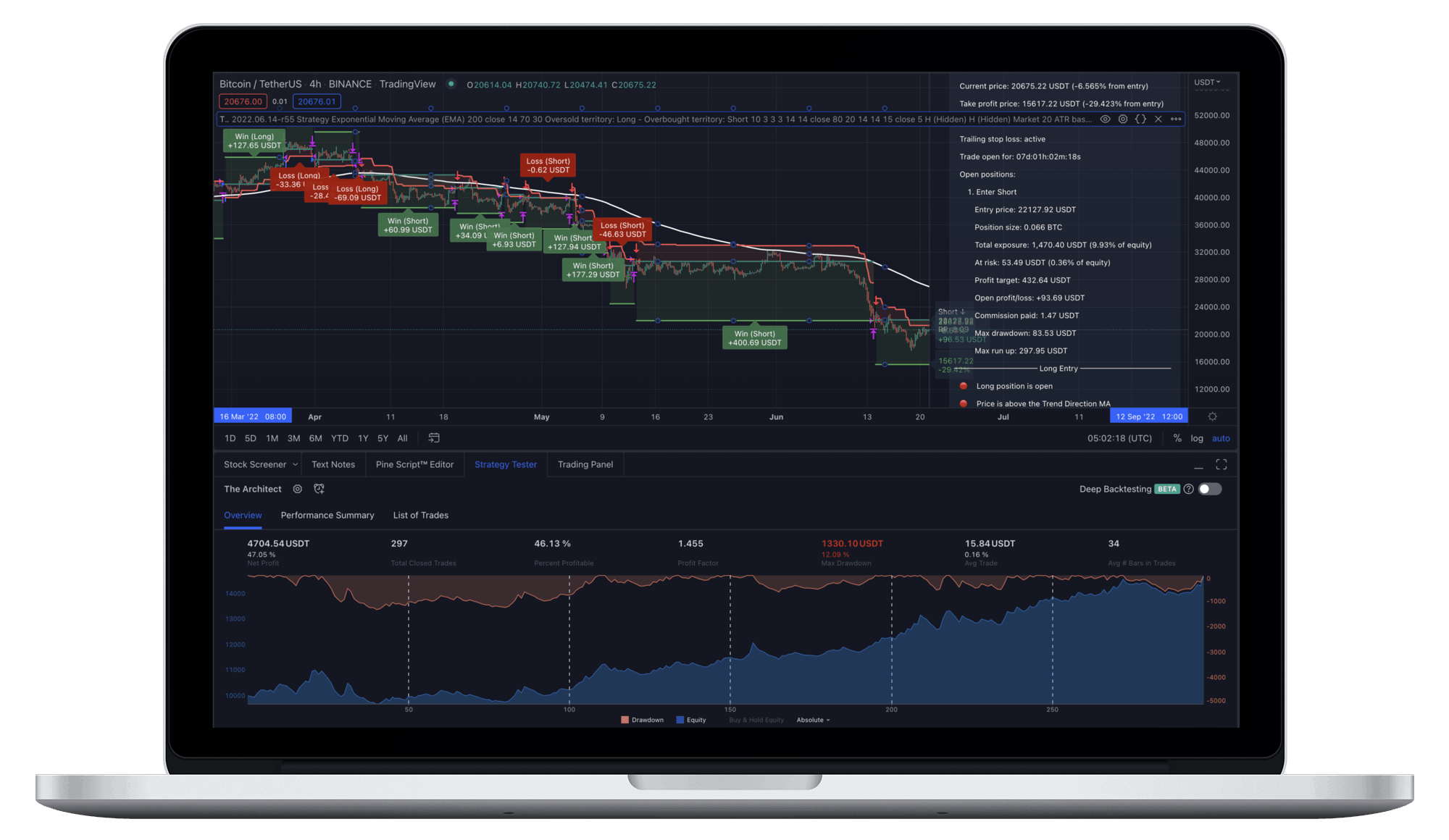 Access all indicators and strategies via a single monthly subscription.

To learn more about our indicators and strategies, check out the Whitebox Documentation portal.

If you have any questions, feel free to reach out to us via the Live Chat button in the bottom right corner of this page.

(If you cannot see the Live Chat widget on the page, that is usually a sign of you rejecting the optional Live Chat cookies on the site earlier.
To change your cookie preferences, please click here).

Backtest & automate trading strategies you have seen on YouTube.